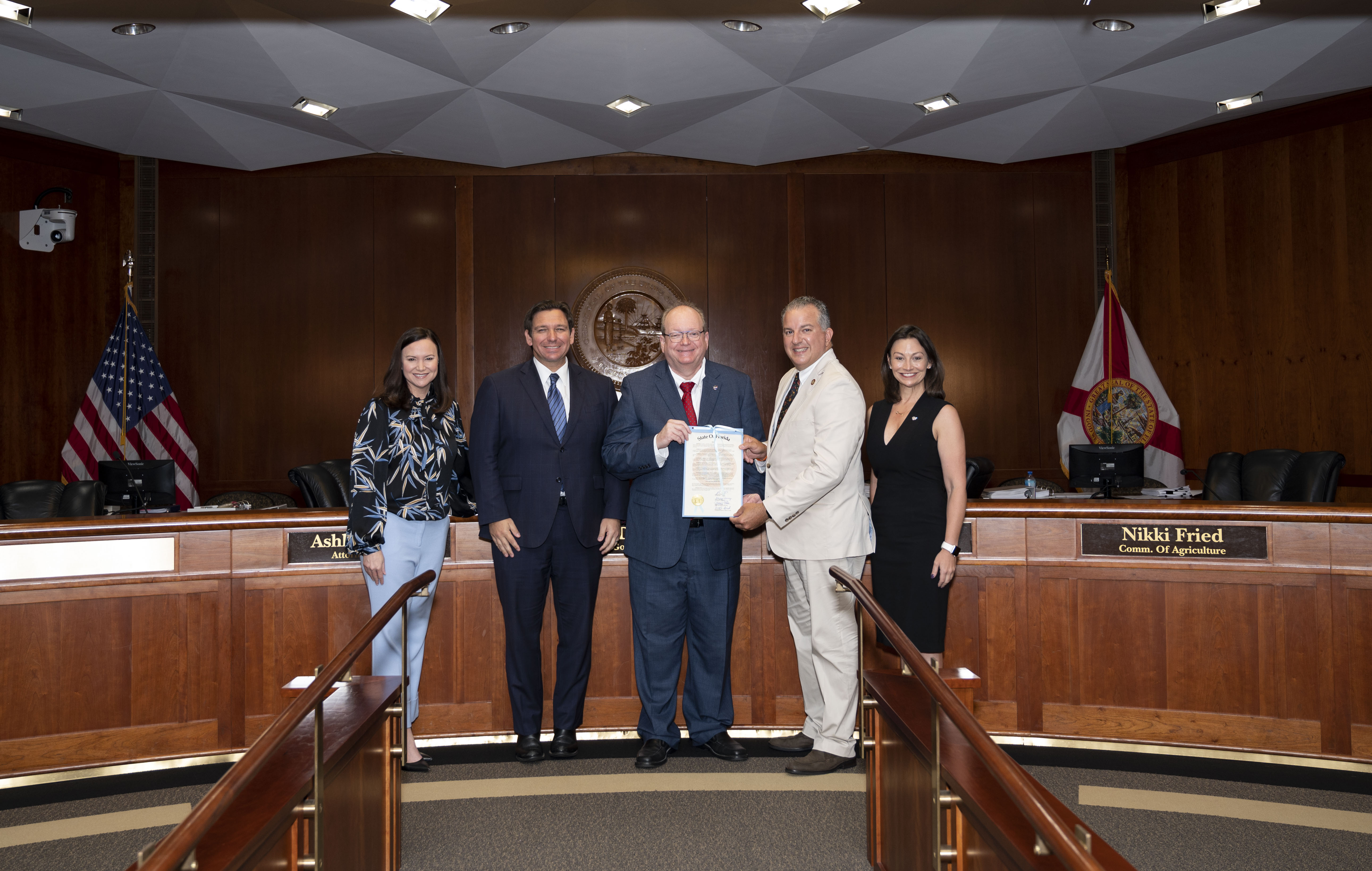 TALLAHASSEE, Fla. - Today, during a meeting of the Florida Cabinet, Chief Financial Officer (CFO) Jimmy Patronis presented a resolution celebrating the 60th anniversary of the NASA Kennedy Space Center and its role in space exploration and as a global leader in scientific discovery. The Kennedy Space Center employs over 2,000 civil servants, 6,100 government contractors, and had a generated $5.25 billion economic impact in 2021.

CFO Jimmy Patronis said, “The Kennedy Space Center holds a special place in the hearts and minds of Floridians across the state. Many of us can remember the first time that we watched a shuttle being launched from Florida’s beautiful space coast. Florida has served as the launchpad for many young Americans who have dreamed of shooting for the stars and achieving their dreams. Due to NASA’s achievements in space exploration, our civilization has experienced unprecedented technological progress and inspired future generations to continue the American tradition of pushing boundaries and exploring the unknown.”
RESOLUTION

WHEREAS, on July 1, 1962 the Launch Operations Directorate was separated from Marshall Space Flight Center to become the Launch Operations Center (LOC) on Merritt Island, FL and received its current name of John F. Kennedy Space Center by President Lyndon B. Johnson on November 29, 1963; and

WHEREAS, every US crewed orbital spaceflight since 1968, beginning with the Apollo program, has launched from Kennedy Space Center property establishing Florida as our country’s leader in spaceflight for both crewed and uncrewed missions; and
WHEREAS, following the launch of Artemis I, the NASA Kennedy Space Center will be one step closer to the launch of the first woman and first person of color to land on the surface of the Moon; and
WHEREAS, in addition to the center’s role as an important launch location, Kennedy Space Center further contributes to our nation’s space program through the Commercial Crew, Exploration Ground Systems, and Exploration Research and Technology and the Launch Service Program; and
WHEREAS, Kennedy Space Center has transformed from a government-focused launch base to a multi-user spaceport with more than 90 private-sector partners and nearly 250 partnership agreements, supporting different vehicles, systems, and launch providers that are enabling a new era of space exploration; and
WHEREAS, Kennedy Space Center is a cornerstone of the Florida economy employing over 2,000 civil servants and 6,100 government contractors, and having generated a $5.25 billion economic output in 2021; and
WHEREAS, the Kennedy Space Center is celebrating 60 years of achievement, honoring the sacrifices of lives lost and commending the countless hours dedicated personnel on the ground and in space have spent away from families to plan and execute missions, and promises the next decade to be full of adventure that only science fiction writers dreamed of and only NASA partners will accomplish.
NOW, THEREFORE, BE IT RESOLVED that the Governor and Cabinet of the State of Florida hereby celebrate the 60th anniversary of the origin of the
NASA KENNEDY SPACE CENTER
and look forward to the future in which Kennedy Space Center will continue its role in space exploration and as the global leader in scientific discovery, fostering opportunities to turn new knowledge into improvements for the benefit of humanity.
WHEREFORE, the Governor and the Cabinet of the State of Florida have hereunto subscribed their names and have caused the Official Seal of the State of Florida to be hereunto affixed in the City of Tallahassee on this 23rd day of August 2022.
Go Back