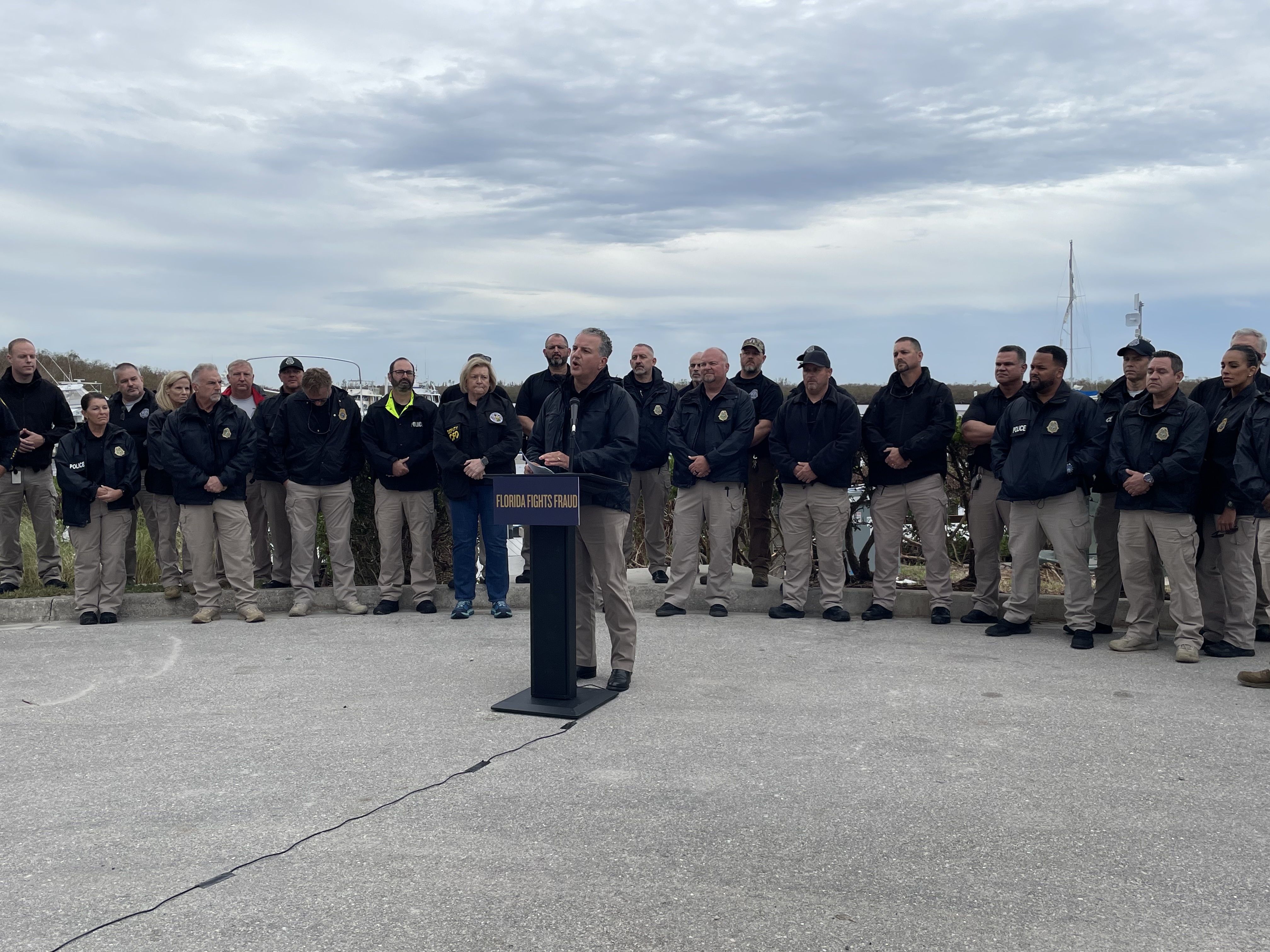 CAPE CORAL, Fla. - Today, Florida Chief Financial Officer (CFO) Jimmy Patronis held a press conference in Cape Coral to highlight fraud prevention efforts in the wake of Hurricane Ian. During the press conference, the CFO announced that he will propose legislation, including cracking down on bad Public Adjusters by curbing their ability to take advantage of Floridians under financial duress, combatting Assignment of Benefits (AOB) abuse by eliminating the use of AOBs altogether, creating a statewide prosecutor focused solely on property insurance fraud to hold fraudsters accountable to the full extent of the law, and lastly, requesting a $3 million anti-fraud public education campaign.

In an effort to curb fraud in Florida last year, the CFO advocated for two Anti-Fraud Homeowner Squads, and since then, these squads have already opened 275 cases and arrested 81 individuals for fraud. Additionally, since Hurricane Ian made landfall these fraud teams have already made contact with more than 7,000 individuals, contractors and businesses to check for licensure, follow up on fraud leads, and open investigations.

CFO Jimmy Patronis said, “Today, I stood with my fraud fighting teams in Cape Coral to highlight my efforts to fight back against post-storm fraud and announce my pursuit of meaningful fraud reform legislation next session. In the wake of Hurricane Ian, we need to build on the efforts from the recent Special Session and continue to reduce frivolous litigation, stop predatory public adjustors, and tackle AOB abuse once and for all. Bad actors use tools like AOBs to take advantage of Florida consumers in their most vulnerable moments, preying on our citizens for too long. At the same time, there are bad public adjusters swarming impacted areas, soliciting, and trying to make a quick buck. They are promising to help while betraying the trust of people who have lost everything. This upcoming legislative session, we are going to work to make it less profitable for unscrupulous public adjusters following a disaster.

“As we speak, we also have more than 40 fraud officers on the ground in Southwest Florida patrolling communities to look out for unlicensed activity and fraud. My fraud teams have already made contact with more than 7,000 individuals, contractors and businesses to check for licensure, follow up on fraud leads, and open investigations. Let me be clear – if you choose to defraud victims of Hurricane Ian – you will be caught and thrown in jail. If you suspect fraud, report it immediately by calling my Fraud Hotline at 1-800-378-0445.”

This coming legislation session, CFO Patronis’ goal is to disincentivize bad public adjusters following a disaster by creating a schedule of how Floridians’ payments will be laid out, under Florida Statutes. CFO Patronis said, “We have bad Public Adjusters swarming impacted areas, soliciting, and trying to make a quick buck. Not only do individuals need more time to get out of a Public Adjuster contract during a state of emergency, we need to reduce the percentage a Public Adjuster is entitled to immediately following a storm, ensuring their motives are aligned with helping Floridians get back on their feet.

Bad actors use tools like AOBs to take advantage of Florida consumers in their most vulnerable moments. CFO Patronis said, “During states of emergency, the number of bad actors looking to take advantage of Floridians increases and we’ve seen these same individuals preying on our citizens for too long, so with the help of the Legislature, I want to ban the use of AOBs.”

A statewide prosecutor focused solely on property insurance fraud to hold fraudsters accountable to the full extent of the law. CFO Patronis said, “We will build on the success of the two Anti-Fraud Homeowner Squads we established last year by adding another unit. Since established, these squads have already opened 275 cases and arrested 81 individuals for fraud.”

Creation of a $3 Million Anti-Fraud and Public Education Campaign. CFO Patronis said, “Policyholders need to understand what they are signing, and that litigation will only slow down their claims and could result in liens on their property.”

Lee County Sheriff Carmine Marceno said, “Fraud occurs every day and criminals are constantly looking for new ways to steal consumers’ hard-earned money. Unfortunately, following a storm that number of criminals increases, and their only goal is to take what is not theirs. I appreciate CFO Patronis getting out in front of this issue and proposing legislation to ensure we protect Florida consumers. It’s time we do right by them and tackle fraud once and for all.”

President-Designate Passidomo said, “CFO Patronis is working hard to fight fraud and protect consumers. My community and so many others across Southwest and Central Florida are just beginning the long process of recovering from Hurricane Ian. We are making progress each and every day, and we don’t want to see that momentum halted by fraud. I appreciate CFO’s effort to stop this criminal activity and protect our communities as we work to rebuild.”

Senator Joe Gruters said, “It is an honor to stand with CFO Patronis to put an end to post-storm fraud. I’m looking forward to working with my colleagues this upcoming legislative session to ensure we protect Floridians from bad actors committing fraud.”

House Majority Leader Michael Grant said, “I appreciate that CFO Jimmy Patronis is about helping Floridians and rebuilding our communities. The CFO’s anti-fraud proposals will help fight against predatory fraudsters after major storms. Something needs to be done, and I look forward to working with CFO Patronis on protecting our citizens, especially when they’re most vulnerable after a disaster.”

Representative Adam Botana said, “Following powerful storms like Hurricane Ian, Florida families should be focused on getting back on their feet as soon as possible. The last thing they need is a fraudster coming to their door and delaying their storm recovery efforts. I’m thankful to CFO Patronis for making fraud prevention a priority and protecting Florida’s insurance consumers from being victimized by scams following disasters. We are in this together and we have your back.”

Representative Mike Giallombardo said, “The CFO has made a commitment to go after bad actors who are committing insurance fraud in our state. The criminals who commit this type of fraud must be held accountable, and the CFO is on a mission to ensure that happens.”

Representative Fiona McFarland said, “Floridians have been through enough with the hurricane disaster and recovery. The last thing they need are bad actors taking advantage of a crisis. CFO Patronis’ has been laser focused on fighting fraud, and my colleagues and I will continue that discussion this upcoming session.”

Representative Jenna Persons-Mulicka said, “Taking advantage of someone following a hurricane or disaster is absolutely despicable. We must do all we can to protect Floridians from the scam artists working to make a buck off families and businesses while they recover from a storm. CFO Patronis has advocated for important legislative reforms to protect consumers and help them get their lives back as soon as possible following disasters. I fully support his efforts to protect Floridians during their most vulnerable times.”